It has been two weeks of some pretty heavy reading and I still have one week to go. However, I wanted to lighten up all my discussions of religion by recommending a book that I read this weekend.

I originally found out about this book a few months ago via a tumblr post and I knew I had to read it. Even if it turned out to not be my cup of tea, it would certainly be Ashleigh’s. Mythology is something that she loves and I have sort of picked it up from her. So what book am I recommending to you today? 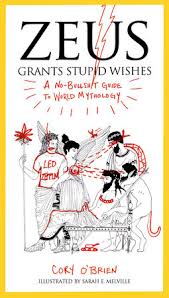 Having taken a Religious Studies 100 class that covered some of the basics of different religions, I was already aware of most of the myths presented in this book. But even that knowledge could not have prepared me for the absolute awesomeness that was these re-tellings. The stories are mostly grouped by religion, but in some cases, by geographical location, such as African religious myths. This makes it easy to follow along.

Cory O’Brien takes stories that are already over the top, adds some colourful and suggestive language, throws in some lines in ALL CAPS, creating short myths and that can entertain for hours. An African myth imparts this tidbit of knowledge:

And he offers up this very accurate observation:

“‘Who put that due in charge of the universe?’/Which is a question I think has been asked many times/about pretty much every god.”

to never be naked/because God is a creepy pervert/who invented you so he could look at your junk.

And this is the moral to on a Hindu creation myth:

Next time you are getting sexed up/just remember that both you and your honey/are made out of the same dude/so basically/everybody is gay.

If those small tidbits aren’t enough to convince you, I’m not sure what will. It is a pretty awesome book. I finished the whole thing in a day. It was entertaining and easy to read. The myths were bogged down by old language and too much flourish or too many details. They contained the necessary information, along with a colourful and hilarious commentary.

Based on all of this, I highly recommend checking out Zeus Grants Stupid Wishes.

Have you already read this book? What did you think? If you haven’t, do you think you will check it out now?

You can purchase the book here. Cory O’Brien’s twitter can be found here and his website Better Myths here.

One thought on “The Reader Recommends”