Welcome back, my glorious readers.

Today, I am continuing with my Pride Month festivities as I review Michael Cunningham’s The Hours. 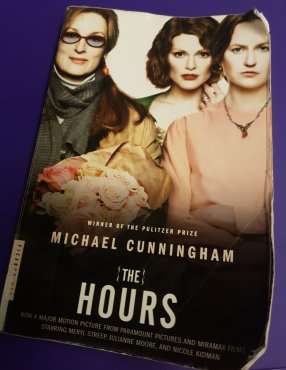 Before reading this book this past week, I had seen the movie that was created from it. At the time, I was on a bit of a Nicole Kidman kick, so this was one of many that ended up on the screen. Now, this was years ago. I don’t think I have watched the movie in over ten years. However, when the book popped up on lists of LGBTQ* books to try, I knew that I should give it a shot.

The Hours follows the tale of three women, whose lives are linked in unexpected ways, on one day of their lives. Virginia Woolf, in a 1923 London suburb, is working on writing a new book and waiting for her sister to visit. In 1949, Laura Brown is preparing for her husband’s birthday in Los Angeles. Finally, in New York City in the late 1990s, Clarissa Vaughn is running last minute errands before a party she is hosting for her friend.

Throughout the stories that each woman shares, there are shared experiences and moments where life as they know it hangs in the balance. One of the most interesting parts of the novel is the continuing reference to Virginia Woolf’s Mrs. Dalloway. Virginia is working on writing the novel, while Laura is reading it. Clarissa seems to be living the story; her friend has even given her the nickname Mrs. Dalloway.

This connection to the story is clear from the beginning as each of the introductions to the characters starts with a direct reference to the book. While I have not read Mrs. Dalloway, I was easily able to determine that the story would become a thread connecting the lives of these three women.

One of the obvious themes in the book is death. The prologue is a momentary glance at a dramatization of the day that Virginia Woolf took her own life. In places, death is used to examine relationships, how they live and how they die. In others, it is an event that the characters are forced to reckon with. While death is something that is normally considered an ending, this novel reflects on how it actually can be a beginning. It discusses how connections can be created by even the most terrible circumstances.

The characters within the pages are interesting to follow, even as they go about even the most mundane tasks. They are engaging and consider topics that are realistic within their situations.

One of the parts of the book that I wanted to mention is based on my experience with the movie. In the book, Clarissa sees a movie being filmed, including one actress leaving her trailer. She wonders who the beautiful woman is, even guessing that it might be Meryl Streep. For those who have seen the movie, you know where I am going with this. Meryl Streep plays Clarissa in the movie. It was a nice added layer that I enjoyed when I came across it.

The book is not difficult to read and is easy to slip into when you have some time to read. It is hardly a book that I would classify in the lesbian genre as the female lesbian interactions are minor for the most part. Yet, it was nice to sink into a book that I was already familiar with the plot to start this month off.

You can purchase the book here and the movie here. Here is a trailer for the movie as well.

2 thoughts on “A Tightly Woven Tale of Three Women”