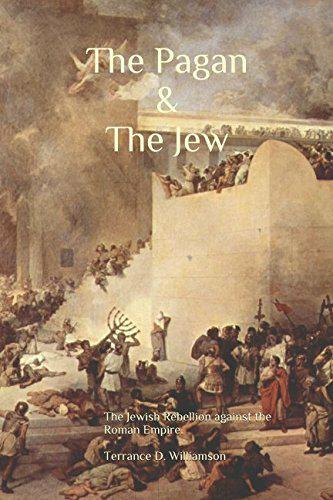 History tells us what people do; historical fiction helps us imagine how they felt.

I have never really spent much time reading historical fiction as it is not a genre that I pick off the shelf normally. Yet, as I try to focus on Saskatchewan authors, I figure I should expand my horizons, seeking new genres and stories. Hence why this work of historical fiction ended up on my list.

If it is not already clear, I am not a history buff. So my review is not going to be based on the truthfulness of the story itself. Rather, it will focus on the story line and portrayal of characters. I did not do any type of research before or after reading this book, not willing to corrupt my view of the events that take place in the story.

The novel follows a group of citizens of Rome circa AD 67 as the Jewish population of Rome decide that they are ready to stand up and fight back against Rome. Emperor Nero gives one of his soldiers an order to quash the rebellion before it creates doubt of his strength and power over the Empire. Titus gathers his father, Vespasian, and together they organize legions to carry out the order. However, Vespasian fancies himself the rightful owner of the throne and plans to use this military action to carry out his desire to become Emperor.

Of course, nothing can be simple and they come up against a formidable opponent in Josephus. He was volunteered to lead the Jewish rebellion, even after advocating for peace, rather than war. Yet, his lack of military experience is partially what allows him the opportunity to keep the Roman legions at bay. The book is presented as a series of battles, sieges and massacres, detailing how an empire pushes back against those who openly rebel against them.

“A hope not for liberty, not for victory, but for salvation. If not for us, then for our children and our children’s children. That they may live in the land God promised them in peace and prosperity.” – Josephus on how desperation has made space for hope, pp 19

Titus and Josephus have their perspectives most commonly offered throughout and the story focuses on their trials and tribulations as the rebellion wanes and grows. As I initially read the story, I made the assumption that these two characters would be the Pagan and Jew that the title references. However, as the story continued, it became clear that it was more nuanced than that. There are plenty of major characters to choose from and the title draws attention to the parallels and battles between these two groups. It is effective because it outlines the individual, rather than groups of Pagans and Jews. This individualized effort is important throughout the novel as minute actions by one can thrust ripples across even the best laid plans.

Early on, we meet Bernice, King Agrippa II’s sister and a devout Jew. She is consistently described as a beautiful woman. She comes across as shrewd and calculating at times, while maintaining her ability to be compassionate to her people. Bernice and Agrippa join Titus and Vespasian as they begin their assault on Jewish occupied cities. Titus becomes enamoured with Bernice and hopes to pursue a relationship with her, but is unwilling to meet her terms to do so. Though she does not remain with the company, Titus’ actions are impacted by his feelings for her even in her absence. She is a formidable force, standing her ground, even when most people would have given in. I enjoyed each scene where she makes an appearance.

I was easily able to identify myself with her motives throughout the book. She is willing to do anything to save the lives of her people. Sometimes, it means making a bargain with the enemy. Her frustration becomes evident quickly though as the cruelty of the Romans is not diminished even by the surrender of Jewish cities. It is a crucial moment as Bernice attempts to argue that further cruelty will only further the cause of the rebellion. Yet, she is ignored, played off as trying to save traitors. Each time her rational arguments are dismissed, I could clearly see how this book was going to continue to get darker, the end slipping away with each slaughter.

One of the things that works well for this novel is that it skips between major moments historically. The main siege in the book lasts over forty days, but we don’t get endless details about minor skirmishes. Instead, we see major battles play out or moments where trickery is used to deplete the morale of the enemy. This is true of the entire book. There are points where the characters are traveling on horseback for two weeks, but we only see the bookends of the journey. The conversations and action are focused into these moments before and after without seeming rushed.

However, this approach does sacrifice some character development and the furthering of relationships between characters. For example, Josephus and Herod are thrown together quickly after one saves the other. That in itself is reason to create a bond that will last. Yet, as a reader, I wanted more interaction between them. I wanted to see how the life debt developed into the friendship that thrives going forward. That is not to say that there isn’t sufficient interaction between the two characters, as there is plenty. This is a preference for me as a reader. I love the interaction that happens outside of the action. What did Josephus and Herod talk about as they raced on horseback for two weeks with the Romans at their heels? It doesn’t take away from the story, but for it me, it felt like something was missing at points.

“She had a good life… and what more can be hoped for in this world than a good life?” – Vespasian, pp 32

Overall, this was an interesting book to read. Especially since it was something new for me. My comfort zone tends to be YA fiction, but my momentary journey into historical fiction has peaked my interest. The story was compelling and the characters are defined well. I am already anticipating the second part to this story. Yup, there will be a second book to follow this one. I am curious to see what happens next. And I mean, I could easily Google how it all ends, something that is strange about the historical fiction genre. But I would rather wait to see the author’s continued interpretation of these events.

Full disclosure: Terrance and I actually work together. When he was still writing this novel, I was honoured when he asked me to do some editing for him. I was able to read the early version of his first few chapters. I have been essentially waiting for him to finish, so I could read the book in its full glory.

Stay tuned for an interview with Terrance about his novel and the history that he used to weave this enchanting tale of characters.

**No work friendships were harmed in the making of this review.**