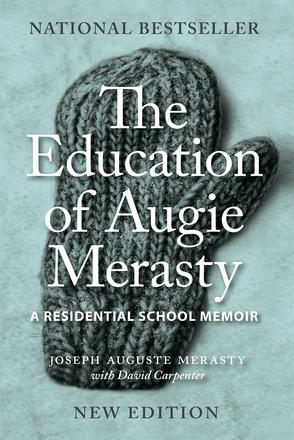 I have seen horror through the eyes of a child – James Daschuk, Author of Clearing the Pines

This line on the back of The Education of Augie Merasty: A Residential School Memoir captured my attention immediately. That and the beautiful cover showing a solitary mitten in the snow.

When I decided that I was going to review some books from Saskatchewan authors, this was the one I knew I had to start with. The book is written by Joseph Auguste (Augie) Merasty with David Carpenter. Within the pages, Augie shares his story about his time at St. Therese Residential School between 1935-1944. It is a heartbreaking look into the Saskatchewan history of residential schools and Indigenous stories.

The memoir begins with an introduction from David Carpenter explaining how he and Augie began this journey. Augie had already written parts of his story down to be submitted to the Truth and Reconciliation Commission, but David saw little of this writing. Instead, he received periodic enclosures of writing from Augie between 2001 and 2013. David took those pages and turned them into a memoir that is a bit rambling, but filled with raw emotion. Augie translated his experiences into words, allowing his story to be read. As David says in his introduction, we, as readers, are

willing witnesses to the ongoing tragedy of Native peoples who suffered from their collision with Euro-white justice, domination, and broken promises.

The story that Augie weaves does not follow any particular pattern. He shares tidbits about the “keepers” that monitored the school and those children who attended. He speaks highly of several of the Sisters who treated them with kindness and actually cared about their well being. Yet, the pages dedicated to these women are over quickly as most of his writing contains the pain that he experienced.

When doing research about this book, the most common story shared was the one that is depicted on the cover. Augie and another student each lost a mitten while out on a walk. They were forced to go out alone in -40 weather with strong winds to find the missing mittens. They found fresh tracks from a wolf, but kept going with only sticks to protect themselves, rather than face the wrath had they returned empty-headed. When they eventually return, no mittens in hand, they were punished with the strap.

This story is not the only one where your heart breaks a bit for Augie. The vast majority of his tales tug your heart strings, even when interlaced with his casual humour in the way he discusses these events. He stumbles through his past, working to share his experiences. He offers his story in a dis-jointed way that adds to the woven web that he carefully shares. He recognizes his own faults when he finds himself in trouble for something he did. He also acknowledges that most of his punishments were laced with racism.

Racism is still deeply rooted here in Saskatchewan. The last residential school in this province did not close until 1997. I was 6 and my younger sisters were born that year. It has been 21 years since these atrocities known as schools have ceased to exist in our province. Even though they are now closed, the wrong doings are not cleared away and racism still exists.

For these reasons, I believe it is incredibly important that stories like Augie’s be shared. He was brave enough to speak out and write it down. That strength should be spread for people around our province to read. Most people know so little about what happened within the walls of those institutions and often try to explain it away or ignore it. The Education of Augie Merasty: A Residential School Memoir is a truly eye-opening read as it transports you into the experiences of someone who was there.

Augie Merasty passed away on February 27, 2017 in Prince Albert, Saskatchewan. While he may no longer be with us, his legacy will live on. I know that I will never forget how this story touched my heart.

To purchase this book from the University of Regina Press, click here.

One thought on “A chilling look into Saskatchewan history”